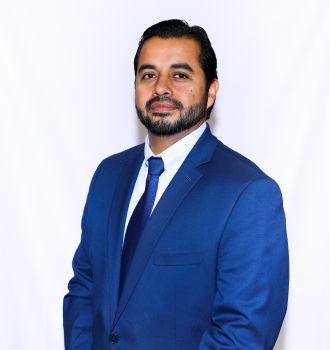 Miguel Salazar is the youngest child of Jaime and Maria Salazar. Growing up in a humble home, his three older sisters and older brother made sure he remained that way. As the youngest child, Miguel had to calculate every move he made and never spoke without purpose. Miguel was very observant of the people around him. This allowed him to develop a keen ability to see the world from many different perspectives. He also developed an admiration for his parents who are both self-made entrepreneurs. Their influence has had a major impact on the person he is today.

As a young adult, Miguel studied at the University of Texas at Brownsville. He earned a B.S. in Mathematics Education. Shortly thereafter he began a successful career in education as a high school math teacher. Teaching quickly became a passion that stemmed from the desire to help others. It is this desire that prompted Miguel to pursue a legal degree. The ability to guide others through uncertain paths is what he thrives in. Teaching also helped Miguel develop his ability to speak in a concise and effective manner. The ability to effectively communicate is something that is lost by many but not by him. This skill will surely prove to be priceless in your legal representation.

“I’ll guide you through the legal process so you can make the best decision possible.”

The decision to go to Law School was made after careful deliberation with his wife, Deisy. It was not an easy decision to make considering that pursuing a legal career meant moving to a city 365 miles away with his two young children in tow. After weighing all his options Miguel decided to enroll in South Texas College of Law. He felt a strong desire to pursue a law degree in order to return and serve the deserving people of The Valley.

STCL is a highly regarded trial law school where the primary focus is on learning the practical approaches to legal representation. It was not easy to juggle school, work, and family. After 4 years of hard work, Miguel graduated and passed the Texas State Bar on his first attempt. The stage was set for Miguel to return to The Valley and pursue his dream to provide relentless representation to the deserving people of The Rio Grande Valley.

Miguel is dedicated to providing service to the community. He understands how to effectively communicate on your behalf. Given the opportunity, you will find that he is the best option to represent you. Not only will you have direct communication with him but he also has experienced staff that will assure you are taken care of.